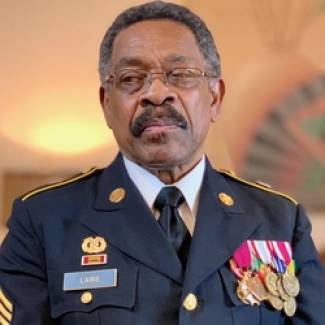 Church Word of Deliverance Ministries for the World, Inc.

DEACON SERGEANT MAJOR ALFRED CLARK LAMB was born to the late Mack and Marjorie Clark Lamb on December 9, 1941 in Norfolk, Virginia. He transitioned to his Heavenly home on Sunday, January 2, 2022 with his loving family and pastor by his side. Alfred was the second oldest of 12 children.

Alfred attended Booker T. Washington High School and graduated in 1959. In October of the same year, he enlisted in the United States Army as a General Supply Clerk at Fort Jackson, South Carolina. After being transferred to Fort Myer, Virginia, Alfred became the Stock Control and Accounting Specialist in 1965 and also served on the Enlisted Promotion Board. Seven years later he was promoted to the position of a supervisor at an E7 level while at Fort Bragg, North Carolina. He was deployed to serve in combat in the Vietnam War from September 1966 to September 1967. Alfred’s military career progressed further and in 1981 he advanced to First Sergeant of the Quartermaster School Headquarters Center at Fort Lee, Virginia. While in Washington, DC in the year 1984, Alfred Lamb was promoted to Sergeant Major. Sergeant Major Lamb toured in France, Germany, and Korea for a total of 30 successful years of service. He retired in 1989 shaped into an honorable man. Sergeant Major Lamb believed the military provided the discipline needed to be successful in life.

During his tour in Paris, France in the 1960’s, Alfred met and married Denise Claudine Fatoux Moret. From this union, two daughters, Corinne and Sandrine, and two sons, Xavier and Jean-Pascal Lamb were born.

At Fort Lee, Virginia, First Sergeant Lamb met Yvonne Marie Searcy in 1981. She introduced him to the Lord and within a few months of dating, he gave his life to Christ under the tutelage of Bishop Willie L. Balthrop, Sr. at The Greater Bethesda Bible Way Church in Petersburg, Virginia.

Sergeant Major Alfred Lamb and his family relocated to Cincinnati, Ohio in 1991 to be closer to Yvonne’s side of the family. Alfred and Yvonne later married on February 15, 1992 and from this union, two sons, Brandon and Ashton Lamb, were born. He was hired as the Regional Facilities Manager at Superior Business Services and managed all the Federated Department Stores. Alfred and Yvonne joined Burress Temple Apostolic Church under the leadership of Bishop Frank Downs and were members for 8 years.

In 1999, he and his family joined Word of Deliverance Ministries for the World, Inc. under the leadership of Bishop Bobby & Dr. Valda Hilton. Alfred had a great passion to serve people and volunteer within the ministry. In 2002, Alfred was ordained a Deacon in the Lord’s church.  Deacon Lamb took it upon himself to make sure that the house of God was always clean and presentable. Taking the initiative led to him becoming the Facilities Manager. Deacon Lamb took excellent care of all the ministry’s facilities and properties.  He was dearly loved and respected by the staff and members of The Word. Vendors came to the church asking to see “Sergeant Major” because of the pleasant relationships he built outside of the ministry. Deacon Lamb did a lot outside of his job description to help the ministry. He faithfully served in his position until the fall of 2021.

Deacon Sergeant Major Alfred Clark Lamb was a man of honor and integrity. To know him was a gift given to us by God. The love for his family was shown through both his actions and words. He never went a day without letting his wife and children know how much he loved them. Deacon Lamb provided the best life for his family and ensured that they were always cared for. A favorite pastime of his was spending time and talking about his children and many grandchildren, telling everyone about his military career, and getting used to his iPhone and personal assistant, Siri. Deacon Lamb loved talking on the phone. He would call his family and close friends and talk to them for hours.

He was a persistent encourager, considerate discipliner, and a shining example for others to emulate. Deacon Lamb was a wonderful friend that enjoyed putting a smile on the faces of those around him with his profound sense of humor. Deacon Alfred Lamb loved talking to people about God. His mission in life was to make sure each person he encountered had a relationship with the Lord. Commitment was a very strong pillar in Deacon Lamb’s character and anyone who knew him experienced that. For 30 years he served in the military, but he was a lifelong solider in the Army of the Lord.

Traditional Service on Saturday, January 15, 2022 at 11:00 AM at Word of Deliverance Family Life Center . 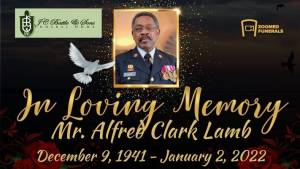