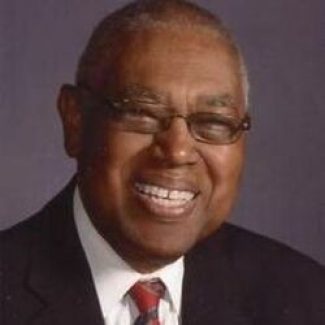 The funeral service for Mr. Charles Anthony Daniels will be live-cast on Zoom and Facebook.

Please tap or click the Funeral Video/Cast tab above to view the service via Zoom or Facebook.

In lieu of flowers please make a donation to American Cancer Society, in memory of Charles A. Daniels.

Charles Anthony Daniels, son of the late David and Pecie B. Sconiers Daniels, was born on December 28, 1946 in Wauchula, Florida. He was the youngest of three children, having one sister (Elzora) and one brother (Alfred). Charles was preceded in death by his parents and hisbrother.

As a young scholar, Charles was awarded the opportunityto attend Tuskegee University. There, he majored in Biology and Pre-Medicine, earning a Bachelor of Science in 1969.

Shortly after, Charles met the love of his life, Grace McCaster. They were united in holy matrimony on June 29, 1974. Throughout their forty-six years of commitment, they were blessed to have an everlasting love, union and friendship that would always stand the test of time.

Charles’ professional career was with Joseph E. Seagramand Sons Distillery, Inc., where he worked in management for the Quality Control Department. After thirty-five years with Seagram, he retired. Charles also served for two-years with the Army Reserve.

Charles converted to Catholicism in 1983 at Saint Bernard of Taylor Creek Catholic Church. He sang in the choir for over forty years and served as Eucharistic minister for over twenty years. Through this ministry, he travelled faithfully to the Brookdale Assistant Living Community in Finneytown to provide communion to residents.

Charles was committed to service in the Greater Cincinnaticommunity. He was a member of Kappa Alpha Psi Fraternity, Incorporated for thirty-three years. He served as a Polemarch for the Cincinnati Alumni Chapter. Charles was also a 3rd and 4th degree Knight of Columbus. He was a Grand Knight with St. Martin DePorres Council #5624, which is the only African American Knight of Columbus
Council in Ohio. For several years, he served on the Board of Cincinnati Union Bethel Community and Family Services and was the President of the Associated Manage, Inc. of Lawrenceburg, Indiana Chapter.

Charles continued his dedication to service, scholarship and community as President of the Cincinnati Association of Black University and College Alumni (CABUCA) and the Tuskegee University Cincinnati Alumni Chapter. He wanted to expose all high school students to Historically Black College and Universities (HBCUs). As a recruiter, he was always asked to present at the various high schools in the Tri-State area. He was always delighted to share information about the Tuskegee experience and HBCUs.

Charles lived his life as a humble and gentle spirit. He showed love, respect, and a high concernment for his wife, family, church, and those who have met him. 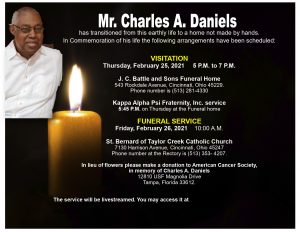