James Lee Taylor was born on February 19, 1933 in Eudora, Arkansas and Arthur Taylor and Leah Evelyn (Kincade) Wilson who preceded him in death. He also was preceded in death by his son, Ronnie Taylor; sisters, Mary Ann Rispy and Laurette Wilson; and brothers, Michael Kincade, Jimmy Howard and Jackie Robinson.

James (Jimmy as he was affectionately called) served his country in the United States Army, completing a tour in the Korean War.

In 1965, Jimmy married Eleanor Carter and this union was blessed with two daughters, Danita and Tanya and one son, Eric. Jimmy and Billie, as she was affectionately called, navigated a blended family of four girls from her previous marriage, Sharon, Angela, Terry and Ingrid. Jimmy and Sonya, Billie Jean and Mark Whitson, together they raised 10 children.

Jimmy loved to bake and cook, often cooking for his children, grandchildren and friends; his way of showing that southern hospitality. He also loved to play his numbers, going to the casino, watching Nascar and football. 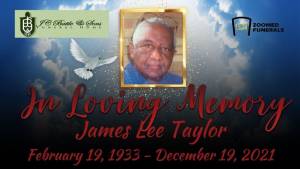