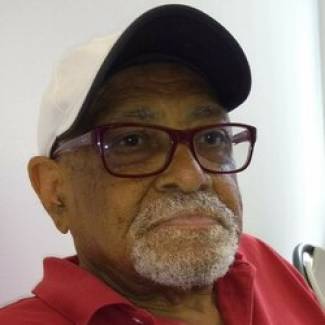 James William Isabel, Sr., the fifth child and second son of the late Clarence and Mary Isabel was born on Monday, August 14, 1933 in Memphis, TN. Three sisters, Marion, Evelyn and Carolyn and two brothers, Clarence Jr. and Charles preceded him in death.

With family, he attended Collins Chapel C.M.E. Church in Memphis, TN. Being reared in a Christian home and atmosphere led him to accept Christ at an early age and be baptized.

As a child, James had a strong sense of authority and responsibility and because he was “bossy”, he was often responsible for looking after his siblings when his parents were not home. One of his personal duties was to ensure his siblings did not go outside the fenced yard while playing outside. His sense of authority and responsibility were James’ true characteristics as he exuded these traits throughout his life.

His first job while in high school was working at a shoe store where he cleaned up and organized the store for customers with his brother Joseph. James’ father, Clarence Sr. introduced his sons to painting by taking them on jobs with him to paint homes which later in life led James to become a professional painter of homes.

The charisma of a musical environment in the home caused James to develop a love for the trumpet and perform with the high school band. He attended Melrose Elementary High School graduating in 1951. After high school, he played with several local jazz bands in Memphis, TN. His musical ability earned him a scholarship to attend Tennessee State University where he majored in Music Education. During his matriculation at Tennessee State University, James became an initiate of Alpha Phi Alpha Fraternity, Inc., Beta Omicron Chapter in the Spring of 1953. He remained an active brother of the fraternity for 69 years.

After graduating from Tennessee State University in 1955, James enlisted in the United States Armed Forces where he served his country with great pride, honor, and dignity for two years overseas in Germany. Upon his honorable discharge from the Army, he moved to Cincinnati, OH and accepted employment with the United States Postal Service (USPS) as a railway postal clerk. Later in life, James became a part-time substitute teacher which developed into a full-time position where he served as a positive influence on the student body. He retired from the USPS in 1988 and from Cincinnati Public Schools in 2003 after having worked 30+ years at both employers. Over time he turned his love of photography into a part time position as a professional wedding and events photographer. Additionally, he used the painting skills he learned from his father to become a professional painter of homes. Needless to say, James was a hardworking man.

In 1960, James met and married Mary Murph. To this union, six children were born. James was a loving father coaching his children’s baseball team for ten years. Following in his father’s footsteps, he taught his sons and his daughter, DeLisa both painting and photography, taking them on jobs with him. In 1976, James’ wife passed away and he continued to support and raise his children as a single father.

In 1999, he met Sue Walker. They fell in love and later married. This union continued until they were separated by his death.

In addition, to his work and family life, James devoted much of his time and energy to community service. He served as a faithful volunteer in helping to organize and chaperone the annual Black College Tour that exposed hundreds of local high school students to Historically Black Colleges and Universities which included his Alma Mater, Tennessee State University (TSU). He was a founding member of the Tennessee State University National Alumni Association’s Cincinnati Chapter where he served as President for over 30 years and was actively involved in local high school college fairs and the Cincinnati Association of Black University and College Alumni. His unwavering commitment to TSU led to the establishment of the James Isabel, Sr. Emergency Scholarship Fund offered by the Cincinnati Chapter.

In addition to his work supporting higher education, James was also actively involved in the Bond Hill Community Council, Postal Service Retirement Alumni Group and Melrose YMCA. James was a member of the Most Worshipful Prince Hall Grand Lodge of Tennessee Free Masonry and climbed the ranks to Master Mason. He was also a faithful member of Allen Temple AME Church where he consistently attended bible study and Sunday church service.

While James was a great father, hard worker and community servant, he also loved to play. He traveled the country taking his children to family reunions. He and his “beach bums” buddies regularly visited the Caribbean Island and Central America to lay in the sun, play golf, and sample the night life. At home he and his “Breakfast Crew “enjoyed breakfast at Perkins. James also enjoyed attending local sorority and fraternity alumni chapter annual scholarship galas and feasting on home-cooked meals.

James never met a stranger and always tried to help others. Those who knew him well would often receive his advice and wisdom-sometimes without asking for it! He embraced life to the fullest, refusing to let any obstacle get in his way.

A precious one from us is gone, a voice we loved is still.
A place is vacant in our home, which never can be filled. 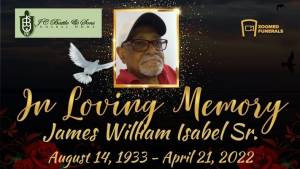