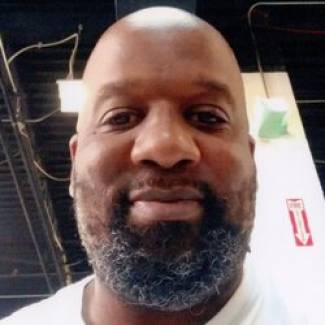 Johnnie Samory Wakefield was born to Johnnie Gibbs and Marrilene Wakefield on July 7, 1972 in Cincinnati, Ohio. He was affectionately nicknamed Coo, a moniker that served him well. After a short battle with lung cancer, Johnnie passed away on Sunday, March 27, 2022. It was a full circle for him, he drew his first and last breath in the presence of his dear mother.

Coo knew Jesus Christ as his savior. H e first worshipped at St. John AME Zion Church. He and his two older brothers, James & Jonathan were in the youth choir, little did they know none of them could sing, but it was a rite of passage to be in the kid’s choir.

Coo’s greatest attribute was his ability to interact and connect with people. He was a people person. Where ever he went he made friends and acquaintances, he knew no strangers. Coo was well known and well liked by his peers. He had great camaraderie with his peers. Coo had three exceptional friendships through his life, first with William Shufford who proceeded him in death and with Lonnie McKinney (Lonjune) and Williams Gavin (Bill). They were so like his brothers.

Coo had a passion for sports like his dad. He could watch baseball, football and basketball all day. He was an avid reader, Back in the day when there was print media. He would buy his favorite newspaper, The Cincinnati Post to read the Sports Section only from front to back. Coo love to seat on the porch to greet the Sunrise with a cup of coffee and a pastry or two, something he did often. He had a sweet tooth out of this world. His sweet tooth was hereditary, it was from his father and he shared it with his sister.

Coo was given the opportunity to work for Speed Enterprise. With this job he found purpose. He took pride that he was working and taking care of his family. Johnnie Wakefield (Coo) and his Savior knew he had changed.

Johnnie Wakefield was predeceased by his father, Johnnie Gibbs. He is survived by his mother, Marrilene Wakefield, his domestic partner, Erica Beauchamp, his children Johnnie Samory Wakefield Jr, Jonae Thomas, J’Sean & Jaiana Beauchamp and Sir Prince Rice And one granddaughter, Jamilah Amoni THomas, Brothers, Tony Gibbs, James & Jonathan Wakefield and his sister, Shanta Wakefield, his nephew Jonathan Wakefield who he held a special friendship with, nieces, Crystal & Rashema Kershaw, Latoya Wakefield Maley and Unique Smith along with a host of great nieces and nephews, an uncle, aunts and cousins lead by a favorite cousin, Manilito Spikes (Pluck) and a ginormous group of his friends. 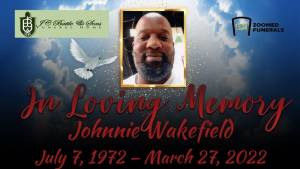