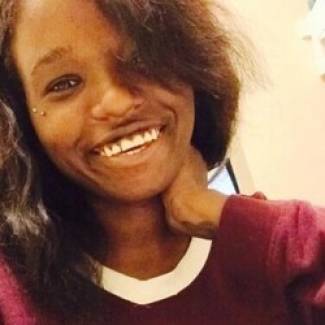 Linda and Chermain, the mom and daughter duo, you could not get one without the other . Chermain was such a sweetheart and so innocent, but Linda knew she had to prepare her baby girl for this cold world. Chermain kept her innocence. She just gained more of a warrior mentality. Nothing could stop Linda, so how could anything stop her daughter. Linda instilled in her how to be a woman and how to be tuff. Chermain was Linda’s rock. Kelly June (deceased) may not have been her biological father, but from nine months of age, that is who she called dad. Chermain and Kelly’s bond was very close. She was definitely a daddy’s girl. All she had to do was make a face, and she would be spoiled rotten.

The Cincinnati Zoo was one of Chermain’s favorite places to go as a kid. Then it was Americana, then Kings Island, then hotels regularly taking Chermain to these places. Before Chermain could even read, she had a book in her hand. She would flip through the pages and smile at the pictures, even sometimes trying to eat the pages. You could say that Chermain’s life was like a book, broken up into chapters. A beginning, a middle, and, unfortunately, an end. So many characters in Chermain’s book. So many breath-taking moments, so many happy moments, so many fantastic memories.

Chermain was so shy, but her heart was so pure, which is why so many gravitated toward her. Once Chermain called you her friend, all that shy stuff went out the window. School for Chermain was easy when her sickness allowed her to attend; she was such an intelligent young lady. People like Chermain do not come around too often in life, especially in her generation, where everyone’s about themselves. She was always helping someone, that is Chermain for you. That is why she stood out; no matter the circumstances, you could always receive something from Chermain. Whether it was a great conversation, time, money, love, even an ideal, she never wanted much in return. Chermain would be happy just knowing that you genuinely care.

Chermain navigated through Cincinnati, neighborhood to neighborhood. Chermain got a chance to touch so many different people’s hearts. You name it, people form Price Hill, Roselawn, Elmwood, Mt. Airy, Evanston, Norwood. Just don’t try to say Chermain is from any of those aread because she would happily let you know she’s from Westwood.

Chermain wanted to be and do so much , a blogger, Youtuber, rapper, writer, designer, stylist, arts and crafts, and many more, but mostly a role model. Chermain wanted to be a rapper as a teenager but was so shy. Some of her favorite female rappers were Rico Nasty and Asian Doll. Chermain would have stacks of notebooks in her room, full of raps, drawings, and stories about her life. That passion never disappeared. Chermain and her nephew JaVaughn would come up with prank videos, order food from different countries, and make reaction videos. She was always up to something. Just know the Amazon van was always en route.

If you did not know Chermain, you knew Ce Ce, and if not, Ce Ce, you knew Cali, and if not Cali, you knew Krybaby Bratz. Four names but one amazing spirit. Chermain wanted to spread awareness about sickle cell but never got a chance to. Chermain was an angel before she received her wings; she will forever be missed. As hurtful as this moment is, it also brings peace knowing that Chermain does not have to suffer anymore. She can finally rest. 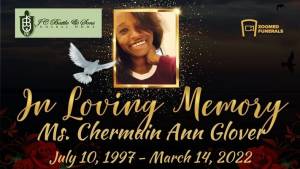