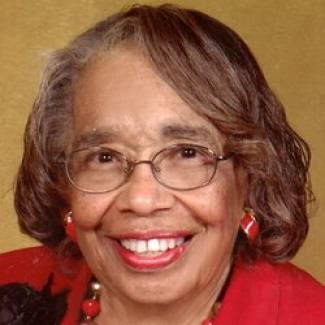 Naomi Delores Pleasant Barkley was born September 30, 1931 in Lawrenceburg, KY to the late Raymond Isaiah Pleasant and Catherine Utterback Harris Pleasant.  She grew up in her hometown and was baptized at age twelve at the Evergreen Baptist Church.  She was the youngest of six children.  Four siblings, Emanuel, Jo Louis, Lucille and Thomas preceded her in death.  Mrs. Barkley departed this life on March 29, 2022 at Mercy West Hospital in Cincinnati, OH.

She began attending school at the age of four at the Rosenwald Practice School at Kentucky State College, Frankfort KY.  She graduated eighth grade from Georgetown, a one room school in Anderson County, KY where her mother was the teacher.   Her secondary education was completed at Crispus Attucks High School, Indianapolis, IN where she graduated with honors in three years at the age of fifteen.  She returned to Kentucky State College (now University), the alma mater of her parents, for her college degree, which was granted in May 1951 with majors in Biology and English.  She was an active member of the Cincinnati, Midwest Regional and National Chapters of the Kentucky State University Alumni and a member of the KSU Foundation, Inc.  She was a member of the Beta Zeta Chapter of Alpha Kappa Alpha Sorority while at Kentucky State.

During her matriculation at Kentucky State, she met her future husband, William Barkley.  They were united in marriage on August 25, 1951 in Chicago, IL.  They started their family in Cincinnati, her husband’s hometown.  They were the parents of a son, Gerald Cameron Barkley and a daughter, Donna Joy Barkley.  Her husband and son preceded her in death.  Since her husband’s death 1989, Naomi has funded the “William Barkley Memorial Scholarship” through the KSU Foundation, Inc.

After her marriage, Naomi attended St. Mark United Methodist Church in Cincinnati’s East End, where she taught Sunday School and was a member of several organizations.  She became a member after St. Mark merged with Bond Hill United Methodist Church where she continued to teach Sunday School for a total of 30 years of service.  She also served as Chair, Pastor Parish Staff Relations, and Lay Leader of Bond Hill-St. Mark (now New Vision).  She started and maintained a Children’s Multicultural Library at the church and secured many grants for their Outreach Programs.  Mrs. Barkley chaired the committee at New Vision to seek incorporation non-profit status of an organization (New Vision Ministries, Inc) to support Outreach Programs of the church.

Mrs. Barkley’s first professional position was as a Science and Physical Education teacher at John G. Fee High School, Maysville, KY followed by a year as a Laboratory Technician at May Institute Laboratory.  She retired in 1994 after 40 years at the United States Environmental Protection Agency (EPA).  Her final title at EPA was Environmental Scientist.  Among her many awards were EPA’s Bronze Medal for Commendable Service in 1986, a patent for the co-invention for a debris washer used for hazardous waste site cleanup in 1996 and 12 awards for mentoring in EPA’s Minority Research Apprenticeship Program.

In 2000, four years after her retirement, Naomi was named a 1999 “Cincinnati Enquirer Woman of the Year” for her community service and volunteer work for her church, her alumni and Crayons to Computers.

In lieu of flowers, donations may be sent to the 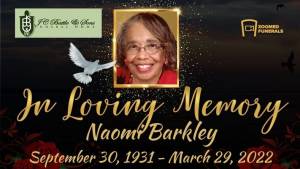